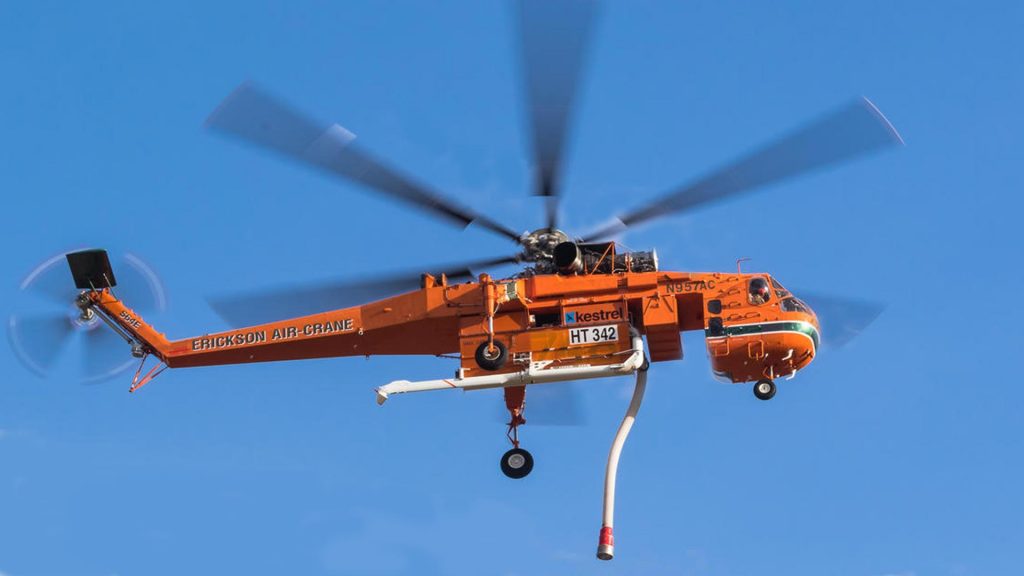 Our fellow firefighters in the UFU Aviation Branch at Adelaide Airport are again fighting for their jobs as the billion-dollar Commonwealth-funded Air Services cynically tries to use the Covid-19 to cut costs.

The UFU Aviation Branch is currently in the Fair Work Commission over a number of issues, including Air Services’ failure to consult about a proposal to transfer the monitoring of and response to alarms in airport precincts across Australia, including to SAMFS at Adelaide Airport.

The UFUSA understands draft proposals suggest the transfer was due to commence as early as next week, ignoring requirements of legislation, resourcing, WHS issues, training, appliances and equipment, and importantly, industrial and moral considerations.

We confirm that the UFUSA has received no consultation from SAMFS about this proposed transfer.

Our union is committed to standing in solidarity with UFU members in the Aviation Branch, as we did when we stood as one to fend off attempts by Air Services to get rid of their night shift (see Wordback here and here for more).

The UFU Aviation Branch is currently involved in a national campaign to support jobs and assets in the aviation industry across Australia, calling on the Federal Government to protect the industry from total collapse.

It also highlights that grounded planes, including the 15 currently grounded at Adelaide Airport, also pose significant risks to workers and assets as they still have thousands of litres of fuel on board and have to be regularly manoeuvred and maintained.

You can read more about the impact of Covid-19 on aviation firefighting and rescue in a July 2020 report of the Centre for Full Employment and Equity which you can access on our website here.

On 23 July 2020 our Union hosted an out of session WHS Consultative Committee meeting to focus on the risks posed by Diesel particulate matter to MFS employees and the ways in which these can and should be addressed.

Those in attendance included ACFO Kilsby, Clara Cipriani, Commander Haatainen and Commander Mack together with President Chas Thomas, Vice President Chris Barry, Industrial Officer Jaspreet Kaur and me. Firefighter Michael Clark who is the UFUSA DPM representative was invited to the meeting to address the UFUSA report on DPM in the MFS and the recommendations contained within it.

There were robust conversations around the latest science and occupational standards on the topic. Overwhelmingly it was agreed that diesel emissions are a hazard to employee health and both parties want to work together in a collaborative manner to eliminate or minimise your exposure to this Group One Carcinogen.

Our union explained to management that the UFU is also working through SA Unions to include the engineering required to make our worksites safe in the plan for economic recovery of South Australia.

In a positive outcome the meeting culminated in the following unanimous resolution:

“The SAMFS WHS Committee acknowledges that diesel particulate is a hazard which both parties recognise needs to be addressed in a collaborative manner. There will be a proposal put forward at the next WHS Meeting to outline short, medium- and long-term goals and a working group to be established under the MFS WHS Committee.”

However, in the interim there are practicable measures members can take to start reducing your exposure to Diesel emissions. These include but are not limited to:

Other links which are of interest include:

World Health Organisation report on Diesel emissions becoming a Group 1 Carcinogen, which you can access here.

Latest research complied by the Department of Mining and Petroleum in WA which has the latest research on new technology “Healthier” Diesel engines which you can access here.

Safe Work Australia guidelines for managing diesel emissions in the work place (please note Safe Work SA endorse this on their website), which you can access here.

PORT PIRIE TRANSFER ALLOWANCE – DO YOU HAVE A POTENTIAL ENTITLEMENT?

As previously reported, the UFUSA has commenced proceedings against the employer in the SA Employment Tribunal for backpay of meals and travel under cl 15.5.3(a)(iv) of the Firefighting Industry Employees (SA Metropolitan Fire Service) Award 2007 on behalf of members transferred at rank of Station Officer to Port Pirie.

We are now advising that Firefighters and Senior Firefighters may also be entitled to the travel and meals allowance under cl 15.5.3(a)(iv) (which you can access here), or the excess mileage allowance (see cl 15.5.3(a)(iii)) for each shift cycle transferred to Port Pirie.

If you were transferred to Port Pirie and were not paid any of all of the meals and/or travel allowances above you might have been underpaid and you should consider making a claim for travel and meals through the chain of command.

If you think you might have been underpaid and your transfer (or any part of it) was 6 or more years ago you should act as a matter of priority to preserve any entitlement you might have as you normally have only 6 years within which to make a claim, although the Tribunal does have the power to extend time for making a claim in certain circumstances.

If you make a claim and it is refused, we urge you to get in touch with the UFUSA, providing a copy of your claim and a copy of the written refusal to Séamus at projectofficer@ufusa.com.au, or at the UFUSA Office on 8352 7211

Should you have any questions, please don’t hestitate to get in contact.

Our union office has received queries from members whose applications for Covid-19 Special Leave with Pay have been refused by the employer. Members advise that they have been told to take personal leave because, although they or their family members had Covid-19 symptoms and were required to self-isolate, their test results came back clear.

I have written to the MFS Chief Officer in concern about this as it undermines the very aim of this new category of leave, which is to encourage workers to report symptoms as soon as possible and take time off work to prevent the spread of the virus.

The success in SA of flattening the curve and maintaining the health of our community and within our workforce has been achieved through the cooperation and endeavours of all involved. It is self-evident that the danger has not passed and we are in this for the long haul so it is vital that individuals continue to be encouraged to self identify and self isolate wherever there may be a risk.

Members will be kept advised of the chief’s response and we will continue to hope and expect that common sense will prevail.

HEALTH & SAFETY AT BROADSPECTRUM – A VICTORY FOR CONSULTATION!

Just over two weeks ago Broadspectrum notified members at both Edinburgh and Woomera, rather concerningly but also candidly, that Broadspectrum is “hurting too many people”.

Rather than announcing a health and safety audit or fast-tracking the much promised fitness and wellbeing programme or upgrading the subpar facilities at both stations, management announced members would be required to self-report on a toolbox in the mess room their fitness for work and any injuries incurred at the beginning and end of each shift.

Together with the diligent UFUSA Shop Stewards and Work Health & Safety Representatives at both Edinburgh and Woomera, we met with management who acknowledged that they had not considered a number of the issues we raised, including how this requirement would work for latent or intially unsymptomatic injuries, or how privacy would be maintained, particularly around mental health injuries.

Last week management notified us that as a result of feedback they are withdrawing the proposed self-reporting requirements: a victory for member consultation!

There is however much more work ahead to ensure Broadspectrum is as safe and healthy a workplace as possible.

As reported in Wordback (see here), the sale of Broadspectrum to Ventia was confirmed last month with no changes yet proposed to members’ work or conditions.

Correspondence received advises that with the acquisition now finalised, “the companies are working to unite the businesses based on their combined strengths. As we create a single business, we expect there will be a level of company change as our intention is to harness the benefits of both organisations to support our clients and their end customers. However, no specific proposals have yet been developed, and no decisions have yet been made, about any changes to the structure of the businesses going forward.”

Members employed by Broadspectrum/ Ventia are assured that our union is monitoring this closely and if this was to change, the consultative provisions will be immediately invoked and members will be involved.

Members would by now be aware of the departure of Minister Corey Wingard and the appointment of the new Minister in the portfolio of Police, Emergency Services and Correctional Services, Vincent Tarzia.

UFUSA President Chas Thomas and I popped in for a meeting with the new Minister yesterday and took the opportunity to brief him on some of the current concerns of firefighters in South Australia, including the parlous state of resourcing in the MFS, focusing on appliances, equipment and training as well as highlighting the failings in the governance of the emergency services sector.

Minister Tarzia acknowledged the frequent changes of Emergency Services Ministers over the last decade and thanked us for the provision of copies of the UFUSA submission to the Keelty Review and the UFUSA response to the Lane Analysis of the Sector. Importantly the Minister gave an undertaking to ongoing open communication into the future.

And he is looking forward to visiting stations and meeting more firefighters, so if you find you have the opportunity, respectfully ensuring the Minister has a clear view of the challenges in our industry will be critical for both firefighters and our community. 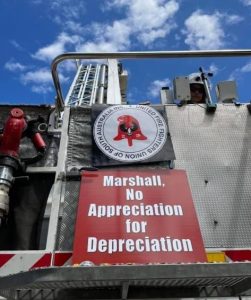 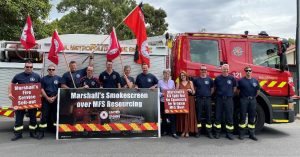